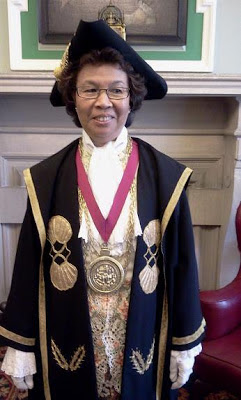 Colchester: Penang born Helen Chuah, 61, creates history today as she is made the Mayor of Colchester in Essex, Britain's oldest recorded town, steeped in history and rich in heritage.

Underneath the traditional mayorial robe, Chuah dons her kebaya nyonya specially made for the occasion. This in itself sums up Helen Chuah, the new mayor of Colchester and Helen Chuah, still the Penang girl at heart. She is the first Mayor to be born outside the country.

"Never in my 41 years here since I stepped foot in Colchester as a student nurse, had I expected to stand here today wearing the robe as mayor of Colchester," she said.


The former student of St Georges Girls' School left the island to do nursing in Colchester in 1971 and in spite of several trips back home, she kept returning to the Roman city to serve the community for 37 years before her retirement and her involvement in local politics.


"Colchester is like a second home to me and after being here for so long it is time I pay back to the community which has accepted me as one of them," said Chuah during a meeting at Colchester's Town Hall where she will be serve as the 1636th Mayor.

The Mayor, explained Chuah who had served as Mayoress when her partner Michael Hogg was Mayor in 2001, is the first citizen of Colchester Borough Council and acts as Chair of the Council.


"I used to take messages and notes and casework for Michael and when our daughter, Rachel Ella Chloe Choo Chean, was old enough, I stood as candidate and won by 125 votes," said Chuah.


In Chuah's acceptance speech, she underlines her wish to support several charities - two of which are in Malaysia. One is a hospice in Penang, where her late mother was looked after before her death and the other, a children's home in Petaling Jaya.


"It is a pity that my father who served in the Merchant Navy and also in the police force, is no longer with us. He was the one who encouraged me to read and pursue my education. He loved history and ceremonies. He would have loved the Mayor Making ceremony. He would have been so proud," she added.


As the Mayor, Chuah or Gaik Choon, as she is known to family and friends, will try to bring people and businesses to Colchester as well as introduce the Malaysian link that she is so proud of.


"As a member of the Rotarian Club, we take our friends to Malaysia every year, and many of our friends love Malaysian food. We are going to work closely with Tourism Malaysia and the Malaysia Kitchen programme," she enthused.


"Her acar is already a great hit among our friends," said Hogg who admitted that the mayor making day was probably the most emotional day for him seeing the woman he shared his life with for the past 33 years, being given the recognition she deserves.