February 19, 2013
SINGAPORE: Prime Minister Dato' Seri Najib Razak and his Singaporean counterpart Lee Hsien Loong have announced a high-speed train project connecting Kuala Lumpur and Singapore, which is expected to be completed by 2020. 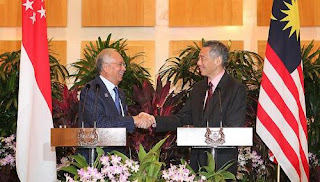 Najib said the project is a "huge game changer" that will enable travel between the two cities to be 90 minutes.

"It will change the way we do business, the way we interact between the cities.

"It will make a huge difference in the way both countries complement each other. The opportunities are boundless between our two countries," Najib told a joint press conference during the 4th Malaysia-Singapore Leaders Retreat.

He said the high speed rail link would make seemless movement for peoples of both cities.

Najib said the announcement was among the vital agreements reached at the leaders' retreat this time around.
In describing the bilateral meeting between both leaders today, Najib said the relations were moving towards a steady progress instead of a spectacular progress.

However, he admitted that the settlement of issues under the Points of Agreement two years and nine months ago, had made bilateral ties to grow even better.

Other issues discussed so far in today's retreat included the Rapid Transit System between Johor Baru and Singapore, water supply matters, ferry service between Singapore and Johor, business and ”physical" links between both nations, and progress of the joint-government iconic project at Marina South and Ophir-Rochor, and another two projects at Medini in Nusajaya, Johor within the Iskandar Malaysia growth region.

Asked whether the projects and bilateral ties between both nations would  be impacted with any anticipated outcome in the upcoming Malaysian elections, Najib said: "depends on whose perspective you are talking about. In our perspective, the projects are long term projects , and in essence, we would want continuity and stability." 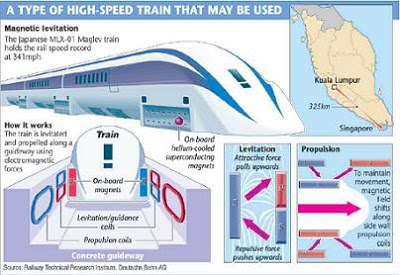 Before this, I've shared some other entry point projects of Greater KL/Klang Valley like KVMRT and Covered Walkway & Elevated Pedestrian Linkage... This time, I'm sharing an update of a very interesting project for Greater KL which is KL-SG High Speed Rail... The purpose of this particular project is to improve the connection between the two greatest cities in ASEAN...

Basically, PEMANDU consists of GTP and ETP... Under Economic Transformation Project(ETP) there are 12 National Key Economic Areas(NKEAs), one of them is Greater KL/Klang Valley, and under Greater KL there are 9 entry point projects, one of the projects is KL-SG High Speed Rail...
ASEAN global infrastructure kuala lumpur malaysia