September 13, 2015
When I took Principles & Practices of Management during my first semester, I learned about human resource management. Mostly, companies will continuously hire new staffs to ensure a stronger growth of their organization each year. They crave for new ideas, higher productivity, better sales figure, etc..

To satisfy the number of workforce demand, employers need sufficient workforce supply. In this case, university is the best place to look for young talents and groom them until they become assets to the company.

Unfortunately, our young graduates especially from local universities are lack of exposure. The only real life scenario they have is during industrial attachment. Most of us are not even aware of vacation internships either, except me. Lol. Everybody focuses on the industrial attachment at the end of the study period which is absolutely insufficient.


Other than industrial attachment/internships, another way to provide exposure for the students to the real working or business environment is by having more collaboration between university and the industry itself. Especially something related to research patents since as we all know universities keep coming out with research projects every year because it is part of lectures' KPI.


Nowadays, most of the research and development projects by the academicians are like white elephant. It stays in the university's resource centres without any significant effort that make an impact to the society. Some of the patents particularly in Science & Technology are quite useful if we commercialize them.

However, in Malaysia cronyism is at its highest level. If any organization either in public or private sector needs a new technology, they opt to import from overseas through any agents/middlemen related to the big bosses or high officials. Some of the products are outdated yet they bought it higher than market prices. To make their cronies richer, nation's creativity and innovation are being compromised.


Below is a video of an Associate Professor from the faculty that currently I am studying in, Dr. Akram Zeki promoting an invention by him and the team called Automatic Interactive Security Monitoring Sytem (AISEMS). Throughout the interview session, he kept repeating about lack of commercialization of research patents developed by the local universities.

In order to make Malaysia as one of the most technologically advanced countries, we have to appreciate all those inventions by the local organizations. Universities in USA and UK are always in the top ranked are because all those institutions have collaboration with the big names like Apple, Toyota, Google, etc.. Every single innovation or even idea from the so-called ivy league universities are being commercialized globally.


Unlike here, in Malaysia.
Prove? Just look at our position in the world university ranking. Hahaha. 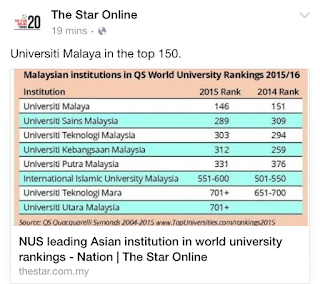 Luckily, we have cosmetic entrepreneurs who are using and selling cosmetic patents developed by the local universities (some are from overseas). So, thanks to Qu Puteh, NV, Sendayu Tinggi, or even Terlajak Laris... Bravo to you guys even though sometimes I get annoyed watching you television commercial, seriously. But never mind, it is their identity. Do not judge.

I hope both government and private sector address this issue seriously since we have a lot of incapable graduates unemployed every year. Exposure is very important so that the fresh graduates can adapt to the stressful company's policies and annual targets. Because after all, they already experienced the actual business environment which is actually much more tensed than studying to get 4.00 CGPA in the university itself with collaboration between the institution and industry players.

Till then. Good day!